Trudging Through the Derby MUD in Lock Step

- October 07, 2019
For the final DerbyCon CTF, I decided to take on the MUD for team Illuminopi. 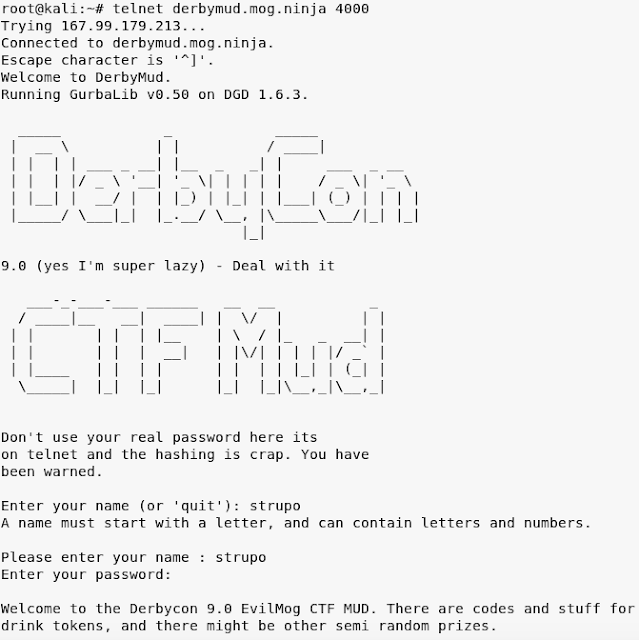 The CTF MUD was created by EvilMog and the world he created was pretty staggering. I really appreciate the effort that he put in to the MUD for us all to enjoy. For those that do not know. a MUD, or Multi-User Dungeon, is a real-time, text based, multiplayer game. You can learn more about them here.

Okay, let's get into it.

Upon your initial login and sign-up, there were more rules, tips, and tricks presented to the player. I mostly ignored everything and went in with tree branches a-blazing!

By the end of the conference; I believe I captured about 4 to 6 thousand points worth of flags in the MUD, and if I recall correctly, I only got about halfway through the challenges.

I attempted to make use of some evenings after the conference to take on the challenges outside of derby and got as high as third place: 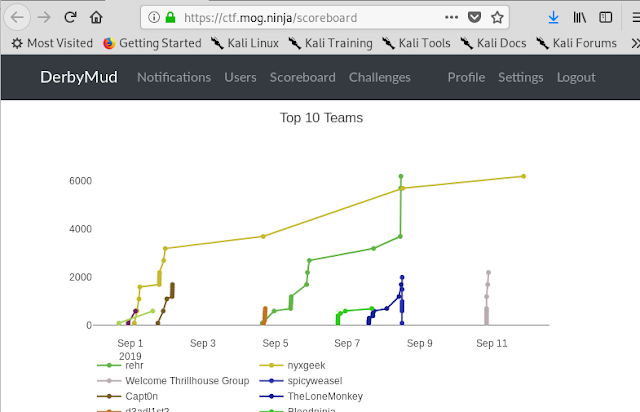 Okay maybe I spent a day on it.

Even with the pictures from a derby file server, I'm not sure how this could be played without graphing paper and a pencil.

I observed what can only be described as art from other teams in the form of meticulous, perfectly spaced, hand taken notes, and superb digital drawings of the dungeon.  As I was woefully unprepared for the MUD and mostly inebriated during the event, my notes were more like the scribblings of a madman found on crumpled cocktail napkins which were eventually transcribed and redrawn on proper graphing paper that I still somehow couldn't get right: 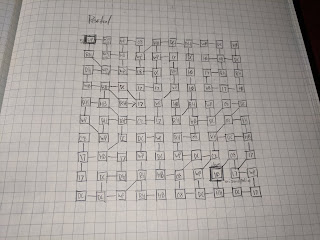 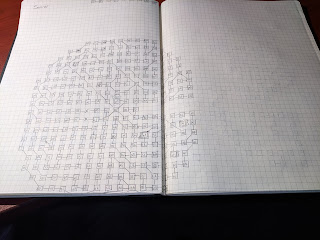 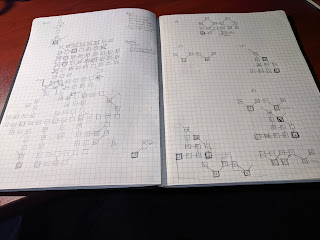 The most interesting experience that I had in the dungeon was when someone controlling a bunch of "Sheep" accounts hunted me down for no reason and killed me. Repeatedly. It may be important to note that when you die in the MUD, you lose all of your belongings, potions, etc...

I believe I was a target of a convenience, and even though they undid hours of my time during the competition, they encouraged me to learn something new.

I had to ask myself, how can you log in to a MUD and control multiple characters in lockstep? The answer, of course, is tmux!

I knew I needed to create multiple accounts that I could log in with so I created Homer, Marge, Bart, Lisa, and Maggie.

In one terminal window, I logged in as strupo. The hero of my story that would reap the benefits and ultimately be protected by the Simpsons clan.

Then, in another terminal window, I started tmux and logged in as homer, as seen below: 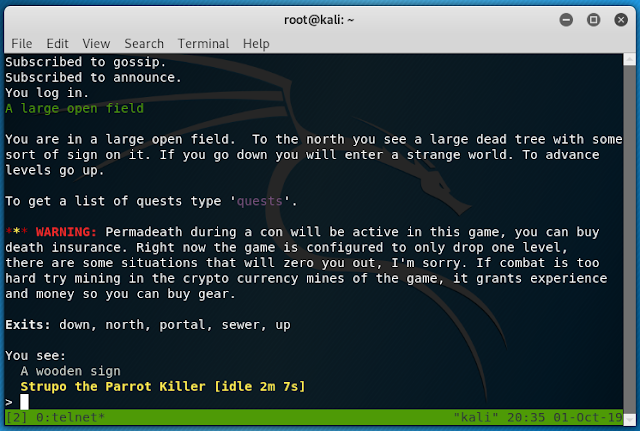 While focused on homer's tmux session, I then pressed ctrl+b and typed :split-window. This tmux feature gave me two shells within a single terminal window.

Now it was simply a matter of repeating the process with the other sock accounts and I was looking at a terminal like this: 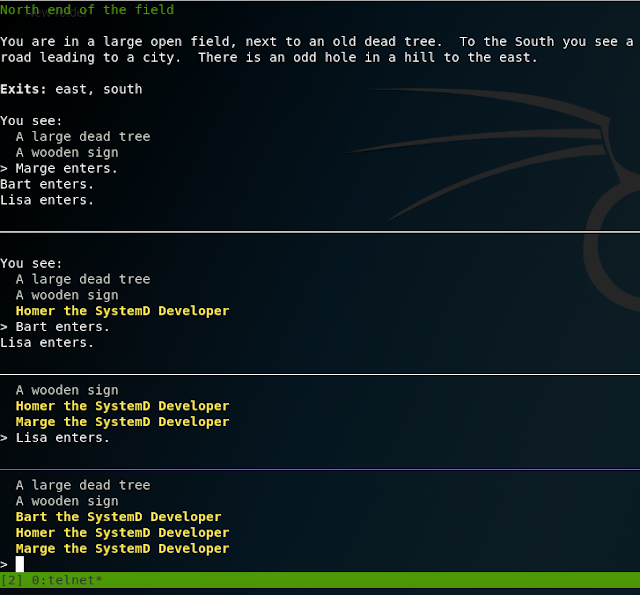 The Simpson, Sans Maggie, Have Entered the Game.

Once all of my socks were logged in, I then issued ctrl+b again and then entered :setw synchronize-panes on

Now, as seen below, all of the sock accounts will move in lockstep. This is not only beneficial in attacking others and defending yourself, it is also useful for farming purple potion. 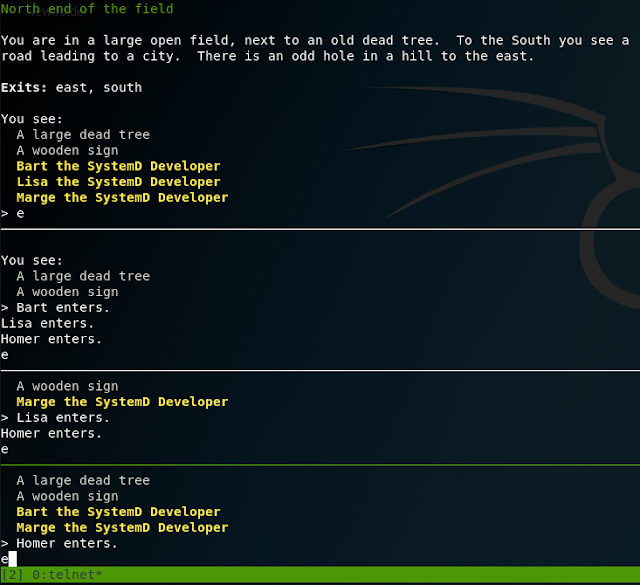 Slide to the Right.

I believe there was a limit of six or so characters in a single room, but this worked well enough for a quick and dirty derby MUD hack to score some quick XP. By the time I figured this out, the sheep herder was kicked/banned and an over powered "sword of 1000 truths" was freely distributed.

In the end, I lied to myself and said that I probably broke even in figuring out this tmux trick vs farming purple potions with a single character. Plus, I learned something new and I had fun hacking on the other challenges with the rest of the Illuminopi.

I'm sad to see the derbycon CTF go, but I am looking forward to what will reconnect the likes of Illuminopi, spiceyweasel, Eversec, and the other fantastic teams that made the competition what it was, again.