- February 05, 2020
The Stonecutters have granted us permission to publish a solve from last year's secret competition. They provided a file named "radio_a_oh_activeman.wav" which was a 30 second clip of the Buggles song "Video Killed the Radio Star." The Stonecutters noted that Radioactive Man has been exhibiting signs of extreme paranoia and they believe that the file contains a secret message intended for Fallout Boy.

Having intercepted the message, we looked at it in audacity and saw a digital signal hidden in the spectrogram: 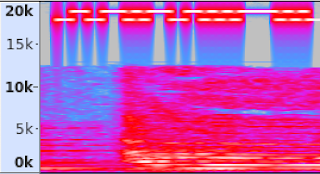 Though it is possible to solve this by hand, this was not the route we wanted to take. Using ultrasonic sound to transmit data is best suited for computers in our opinion. So, the problem is now: What tool(s) do we use in order to decode the signal?

We spent more time than we would like to admit playing "guess the tool." There are dozens of github projects and also mobile apps available for this purpose, but none of them seemed to work.

We knew we were on the right path but we were still missing a crucial piece of the puzzle.

The song title, "Video Killed the Radio Star," kept steering us back to when we first started learning about Software Defined Radios (SDR). One of the first things we attempted to do with our SDR was get it working with GNU radio. For those unfamiliar, GNU radio is a tool that is as powerful as it is esoteric and confusing. We really did not want to have to use it to solve this challenge so we hunted for alternatives. One result pointed us at a program called "minimodem."

Minimodem is a general purpose software audio FSK modem. A CLI program that decodes/generates audio modem tones at any specified baud rate, using various framing protocols. It sounded promising, but initially, we couldn't use the tool with the file as provided because there was more than one channel:

Though we could have also fixed this problem using audacity, a quick google search told us that we could use Sound eXchange (SoX).

SoX is the Swiss army knife of sound processing programs. It can change formats, apply effects, and also convert the audio file to a single channel. We used the following command to do so:

Now that minimodem was running without errors, we needed to adjust the settings so it would only read the frequencies that held the signal. Based on what we saw in audacity, we knew that the signal started around 18000Hz, and the top end was somewhere around 20000Hz.

Our first run did not yield anything useful:

After some digging and guess work, we made some progress by running this command:

Here are what the options mean:

--rx (or -r)  Read, rather than transmit.
100 is the baud rate. Set to 100 based something we read on stack exchange.
-M sets the Mark Frequency.
-S sets the frequency space.
-f specifies the single channel input file.

Taking a cue from the lyrics of the song, we changed the frequency space to 1952:

If you are interested in applying this write-up to a similar challenge, here is a version of it that we put our own spin on for Eversec to use at BSidesRDU 2019.

Hack The Box (HTB) hosted its very first "corporate only" CTF this past weekend and called it  HTB Business CTF 2021 . Participants had to create new accounts directly linked to their employer, teams were capped at 10, and the challenges were mostly intermediate to hard on the difficulty scale.  HTB Business CTF 2021 Sadly, I was alone on my team and only had the first day of the event to devote. So, I decided to focus only on the cloud challenges and I was able to solve the first one. So without further ado... Let's get into it. Theta We're in the practice of open source cloud services and thinks that the deployment is secure so far. As a part of a pentest engagement, can you test and report the vulnerabilities? I began this challenge with a port scan: nmap -p- -sV -Pn --open -iL target.txt -oA nmap-theta_full --stats-every 120s Nmap scan report for 10.129.171.200 Host is up (0.043s latency). Not shown: 65533 closed ports PORT     STATE SERVICE VERSION 22/tcp   open
Read more