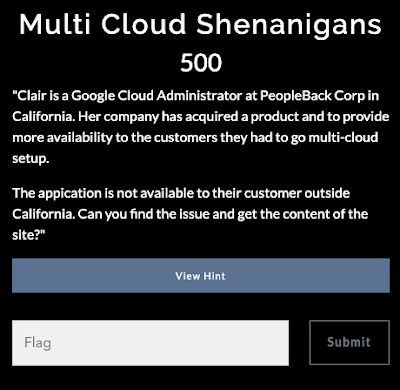 "Clair is a Google Cloud Administrator at PeopleBack Corp in California. Her company has acquired a product and to provide more availability to the customers they had to go multi-cloud setup.

The appication is not available to their customer outside California. Can you find the issue and get the content of the site?"

After the hint was released, I finally had a hit using the Code Search feature on sourcegraph.com for one of the terms relating to the challenge: BeoShaft
From there, I browsed directly to https://github.com/BeoShaft and clicked through the small amount of contents in the repo until I saw this image: 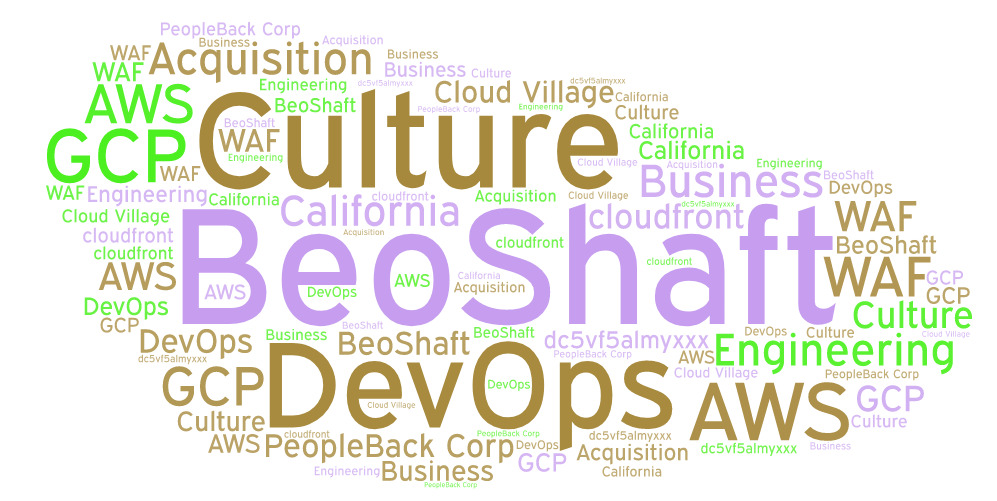 "Word Art.jpeg"
The string "dc5vf5almyxxx" caught my attention right away. At first I thought this may be part of a URL for a lambda function. I crossed checked its length with a function that exists in my personal account and they didn't add up. Even if I removed the X's at the end of the string I still wouldn't know the function name. I went back to the image and looked for anything that might be a lambda function name. But then I was distracted by the string "cloudfront."

I know from working with cloudfront a bit that this could be a solid lead. I went back to my account and counted the characters and saw that they were the same.

The math checked out; so I then started screen and ended up using a super slow for-loop:

Once this was finished, I looked at results.txt where I saw only one 403:

I struggled more than I'd like to admit here; seeing how I had a similar experience with last year's "Sweating It Out" challenge. But, I realized I was targeting an AWS URL from an AWS instance and that the challenge was called "Multi Cloud Shenanigans."

So I switched over to GCP and I sent a request from a VM in the Los Angelas region, and then I was able to successfully connect to the target site.

Finding .git directories is always fun. I then used GitTool's gitdumper.sh against the target:

Finally, I grep'd for the flag: